A team shall consist of five (5) players minimum to ten (10) players maximum. A team will not be permitted to start a game with less than 5 members. Only players, two coaches, and one statistician are allowed on the team bench. 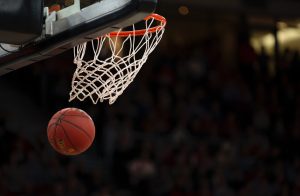 Each team is to be in a standard uniform (every member dressed alike). Each player’s shirt is to be numbered on both front and back with a solid color number contrasting with the color of the shirt. The number on the back shall be at least six inches (6”) high and the number on the front shall be at least four inches (4”) high. Teams with similar colors will wear pullovers. NOTE: Any number, one or two digits, cannot exceed “5.” 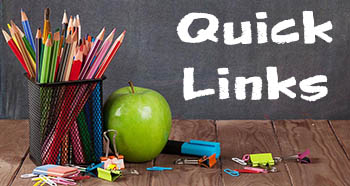 The team representing the smaller school (age 13 and older students) shall have the first choice of ends. Teams shall change ends at the half. Benches will be assigned by the Director.

A game shall consist of two, eight-minute periods separated by a five-minute half time. A game shall be won by the team having scored the most points by the end of sixteen minutes of playing time. Winning teams advance. Winning team coach takes game report, with score of game, to the check-in table for the next assigned game time. Losing teams are eliminated, unless needed to determine third through sixth place. G.Y.C may play double elimination, if time permits. The time rules are to be used for the entire tournament, even championship games at G.Y.C.

Each team is given two (2) full one minute time-outs and two (2) thirty second time-outs per game.

Three (3) minutes duration, each team will be allowed one additional time out.

Three personal fouls per game disqualify a player. Bonus foul shots will be 2 foul shots on the 7th and subsequent team fouls in each half.

For general rules, see the National Federation of State High School Association’s Basketball Rules Book. G.Y.C. rule states that any team that is 45 minutes or more late for their scheduled game will forfeit their match.

Each team must provide one person to help with the score table for each game played. 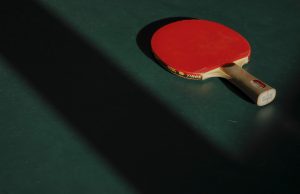 The racket may be any commercially produced paddle with rubber sheets. The rubber sheets must completely cover the side or sides being used to strike the ball. There can be no holes or damaged portions on the rubber sheets. (Sandpaper, cloth, or bare wooden surfaces are not allowed.)

Because of a limited time schedule, warm-up may be no longer than two (2) minutes on the game table.

Games will be played to 11. A match is best two-of-three games. After each 2 points have been scored, the receiving player shall become the serving player and so on until the end of the game, unless both players score 10 points. When the score is tied at 10, the serve will alternate after each 1 point until a player wins by 2 points. From quarterfinals on (if time permits), a match may consist of the best three-of-five games.

During the course of a match, coaching is not permitted during a game but can be done between games, if it does not delay the next game. Because of the time limitations, play should be continuous. In the final match, play should likewise be continuous throughout, except that either opposing player is entitled to claim a repose period of not more than five minutes duration between the second and third games of a three-game finals match. Any other circumstances requiring a delay in play, be it injury, equipment problems, or other, shall be considered and ruled on by the Chief Judge. Judge will call score before each serve. A serve made prior to score called will be a let and will be played over again. Contact with the ball must be above the table level and behind the end line (not sides) on a serve. The judge must be able to see the ball at all times. The server must hold ball in OPEN PALM and toss ball up during the serve. If a player fails to strike the ball after it has been tossed up for service, the receiver gets the point. The player shall lose a point IF his free hand or body disrupts playing surface. Instruct the players to check with the head judge before leaving the room after each match. 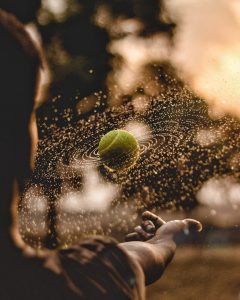 The racket may be any commercially produced racket.

It takes four (4) points to win a game unless the game reaches deuce, in which case play continues indefinitely until one player gets two (2) points ahead.

A regular set shall consist of six (6) games. A short set begins play at two (2) games all. The 12-point tie breaker will be used in all sets that reach six (6) games.

For general rules, see the U.S. Tennis Associations Rule Book. It may be ordered from the following address or through your local bookstore.

It is recommended that teams learn to play “power volleyball” as opposed to an open-handed “beach ball” type of game. The Volleyball Rules Book, published by the National Federation of State High School Associations, gives more precise rules and regulations. You must obtain the latest edition of these rules as they are subject to change each year. To order, call or write to the address given on page 3 of this Section.

A team must have a minimum of six (6), maximum of twelve (12) members to compete. A team shall consist of six (6) players to begin a match. Only players, two coaches, and one statistician are allowed on the team bench.

Each team is to be in a standard uniform (every member dressed alike).Each player is to be identified by a number on the uniform top that is not a duplicate of a teammate’s number. It is recommended that a 2-inch number be placed on each sleeve near the shoulder seam. A 4-inch number shall be located on the upper front of the uniform top and placed so that the top of the number is no more than 4-inches down from the shoulder seam. The number on the back of the uniform top shall be at least 6-inches high.

Rally scoring is to be used to keep score. Points are awarded on each play regardless of which team serves. The let (net) serve shall be allowed, and play shall continue provided net contact is entirely within the net antennas. Matches are two (2) out of (3) games. The 1st two games are played to 25 with a cap of 30 (this means if a game is tied 29-29, the next point wins). The 3rd game is played to 15 (with no cap and the first to 15 wins).

Before a match begins (and before the third game of a match if necessary to determine the winner of a match) the team from the least total pupil enrollment (age 13 and older students) shall have the choice of serving/receiving or from which court they will serve.

The coach may make a request for substitution when the ball is dead. The referee will report the change to the scorer and then signal the substitute to enter the game. The incoming player must take the position in the serving order of the player replaced. Correct substitution procedure is covered in Rule 10 of National Federation’s Volleyball Rules Book. It includes the number of entries a player is allowed; substitution for an injured/ill player before and during a game; and illegal, improper, and abnormal substitutions.

When a team loses its serve, the team receiving the serve rotates one position, clockwise. Player Actions Pass A play in which the ball is hit into the air so that another player can get into position to contact the ball.

Any play adding force and/or direction to the ball with the intention of returning the ball to the opponent. A team’s third hit is always considered an attack.

A play approximately arm’s length from the net in which a player, whose hand is raised above the head, contacts the ball near the top of the net in an attempt to:

Requests for time-out shall be made by the coach or playing captain only during dead balls but not after the referee has signaled for the next serve. Charged time-outs shall not exceed 60 seconds, and each team is limited to two time-outs per game. Requests for additional time-outs shall not be honored and shall be penalized by point or side-out. Time-outs may be taken consecutively without play between them. A time-out requested prior to the start of the game shall be honored. An additional time-out shall be permitted each team if/when the score is 25-25.